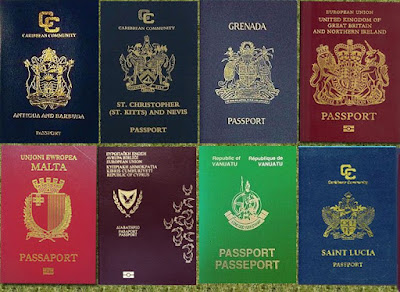 If you thought that the large number of passports, sold by the Comoro Islands to Iranian nationals engaged in sanctions evasions was disturbing, Iran is now conducting its passport purchases elsewhere on a grand scale. Reliable reports from inside Iran have confirmed that the government is accquiring foreign passports from a number of nations in Africa and other regions, in a desperate move to allow it to collect funds, and evade Western sanctions and controls, using aliases with clean identities.

While we have previously detailed the circumstances of Iranians flocking to the East Caribbean states, to purchase passports through the five Citizenship by Investment (CIP/CBI) programs administered there, including the Alireza Monfared scandal in Dominica, and Iranian moves in St Kitts & Nevis, and Antigua & Barbuda, this additional passport buying frenzy is indicative of actions that have been forced, due to recent law enforcement activities, such as against Pilatus Bank in Malta, and its owner, in the United States. Additionally, Iran must still collect huge sums for unpaid covert oil sales, particularly in Latin America.

Whether Iranian agents are using specific financial pipelines that flow through the United States or Western Europe is not known, but assumed, given that the covert transactions are in US Dollars and Euros. Compiance officers at international banks should be on the alert to an increase in transfers whose ultimate destinations are in the Middle East, from where funds movement into Iran is the traditional evasive route taken, to avoid discovery by US agencies.

The key, of course, is the fact that the passport holders:
(1) Will not be native-born nationals of the countries where they hold passports. Check place of birth.
(2) Will have brand new passports, with little or no arrival or visa stanps.
(3) Will most likely not speak the official langaunge(s) of the nation in which they hold paassaports.
(4)  Will probably not be ethnically or racially the same as indigeneous nationals of their "country."
(5) If they do actually speak the official language of their passport country, it will not be with the same accent, neither will they be using slang, nor will they exhibit the linguistic characteristics of speakers from that country. If you have native speakers on your staff, they will instantly confirm the non-native speaker status of these new clients. Ask them to conduct the collection of personal information on those prospective clients.

Your bank compliance staff should be briefed on this new information, and be advised to be alert for any of the above "red flags" that indicate that specific passport holders may not be exactly what they appear to be, and require Enhnced Due Diligence, to rule them out as Iranians violating international laws and sanctions.