US OFFERS MULTI-MILLION DOLLAR REWARD FOR CAPTURE OF HEZBOLLAH LEADERS 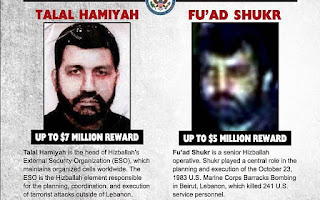 The American Rewards for Justice Program has posted five and seven million dollar rewards, respectively, for two prominent Hezbollah leaders, FU'AD SHUKR and TALAL HANIYAH. Shukr is alleged to have been the planner of the terrorist bombong of the US Marine Corps Barracks in Lebanon in 1983, which resulted in the deaths of 241 servicemen. Haniyah is alleged to be the supervisor of Hezbollah terrorism outside of Lebanon.

The announcement comes on the heels of two major statements, by the opposing sides of the Lebanese-Israel border:

The president of Lebanon, on Egyptian television, stated that Hezbollah was a part of the Lebanese Army, and it was needed to defend itself against the Israeli "occupation" of the Syrian Shebaa farms area, which is the Hezbollah bogus territorial claim it uses to defend  its failure to follow the UN Resolution, and disarm.

A senior Israeli military official recently affirmed that since Hezbollah is now virtually the same as the Lebanese Government, any future Hezbollah-Israel hostilities will include all of Lebanon  as legitimate targets. Such an action may destroy the critical Beirut financial center, as well as vital infrastructure throughout the country, and Lebanon should be aware of these consequences.