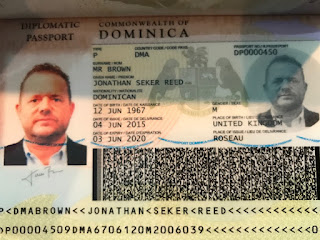 Readers who yesterday questioned why I failed to specifically identify what US government agency is investigating certain members of the leadership of Dominica, please remember that I have no wish to be accused of neither Obstruction of Justice nor a violation of the Intelligence Identifies Information Act'; rest assured, though, that the story is true and correct. The source has a long record of accuracy.

I  do want to add some additional information, inasmuch as there are perhaps a few who require a reality check, regarding how much unwanted attention Dominica has drawn from afar, due in large part to its illicit diplomatic passport sales scheme.There is a second country, in addition to the United States, that has recently sent undercover investigators into Dominica to make inquiries. We know that because the Commonwealth has been repeatedly visited by a few foreign nationals who have been spotted by certain sharp-eyed Dominicans, who kindly passed their names on to me. One of those individuals is known to me to be a career investigator, acting in an undercover capacity, on behalf of a specific nation; again, I have no desire to interfere with their tasks, so they shall remain anonymous.

Whether there will be criminal charges filed in that jurisdiction is not known at this time, but it does indicate that there are Persons of Interest under investigation, for violation of criminal statutes.