THE EMPIRE STRIKES BACK 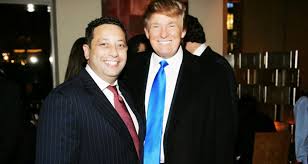 Our recent article on Felix Sater, whose business card lists him as a "senior adviser" to Donald Trump and the Trump Organization, was hacked, when it was republished on another website. The Sater/Trump business card was removed. and two-thirds of the article was destroyed. Do you think that we hit a nerve somewhere in the power structure ?

Sater, a twice-convicted felon, is reviled here in South Florida, due to his criminal conduct, which was accomplished in no small part because a judge in New York sealed his criminal file, while he was a CI, denying the investing public the truth about his dark history, resulting in their placing investments with him, which they lost, due to his fraud.
Posted by Kenneth Rijock at Tuesday, October 10, 2017