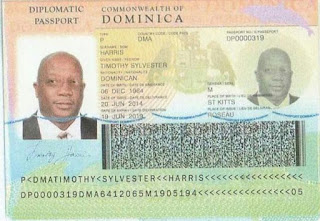 The Prime Minister of St Kitts & Nevis, Timothy Sylvester Harris, has denied holding a diplomatic passport issued by the Commonwealth of Dominica, though a copy has appeared on several Caribbean media websites, but the authenticity of the passport has never been disputed by any senior official in Dominica. In fact, the Government of Dominica has been strangely silent regarding the subject, when the normal response would be to either confirm or deny that the document is genuine, and issued by the Ministry of Foreign Affairs. It would take Dominica five minutes to examine & reject the document, and the failure to do so speaks volumes regarding the truth. Check the passport number, please, and respond.

At this point, it might be helpful to remember that the Foreign Minister of Dominica has repeatedly refused to publish a comprehensive list of all the 500+ diplomatic passport holders, claiming that to do so would hinder the abilities of these "diplomats" to perform their functions quietly. The problem is that all the foreign diplomatic passport holders are neither properly qualified, nor certified by any accepting jurisdiction where they ate allegedly posted. In short, these foreign buyers of diplomatic passports are legally unqualified to be regarded as diplomats, as they fail to meet the the terms of the Vienna Convention.

We do not know more than a small amount of the names of these bogus Dominican "diplomats, " as well as CBI documents, but those we do know are Iranians, Chinese, Nigerians, Chinese working for North Korea, and others from high-risk countries. Therefore, until we have a complete and accurate list of those who bought their "diplomatic" and CBI status, compliance officers at North American & EU banks must place all Dominica passports as suspect, and high-risk.

That is patently unfair to Dominicans not engaged in transnational white-collar crime, but a sad reality, and the Dominica "infection," meaning close compliance scrutiny, is liable to spread to the other East Caribbean countries that offer CBI products, and diplomatic passports, under the table, to dodgy and unqualified applicants, without transparency.