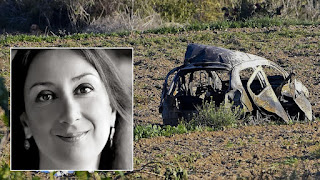 This is Daphne Caruana Galizia, an investigative journalist in Malta. She was killed when a car bomb detonated, while she was driving her automobile. Mrs. Caruana Galizia, whose son was an ICIJ journalist involved in the release of the Panama Papers, exposed official corruption and money laundering,  at the cabinet level and above, when she extracted information implicating senior government officials for holding offshore corporations and hidden bank accounts abroad. That is what is left of her car, after the explosion.

The journalist, who also exposed rampant corruption among powerful figures in Malta, as well as activities of the country's organized crime syndicate, was killed while driving away from her home. If anyone still thinks that money laundering is a white collar crime, with no real victims, think again.
Posted by Kenneth Rijock at Monday, October 16, 2017