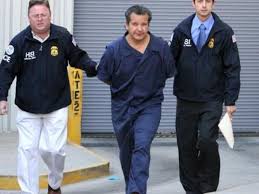 Marco Antonio Delgado, the prominent El Paso attorney who laundered an estimated $600m in narco-profits for a Mexican Cartel, had an illegal business relationship with the ex-wife of a Mexican president, and betrayed a US law enforcement agency for whom he was acting as a Confidential Informant, this week received a sentence of imprisonment in his second federal criminal case. Delgado, who had refused to enter a guilty plea in the first case, causing his defense attorneys to have his mental status examined, is now looking to serve a long term of incarceration, as he has reportedly refused to cooperate against his former cartel clients.

The defendant, who was caught laundering drug profits after he agreed to act as a CI, when one of his bulk cash couriers was arrested, had previously received 16 years on the money laundering conviction. The second case involved the illegal diversion of $32m, from a Mexican power plant contract, into his offshore accounts in the Turks & Caicos Islands, after he forged a signature, and used the money to purchase real estate, and kept the remainder offshore, top avoid detection.

The trial judge sentence Delgado to 10 years on the second case, in which he was charged with money laundering, wire fraud, and conducting transactions with criminal proceeds. In an unusual move, the Court ordered that one-half of the sentence, five years, is to run consecutive to his existing 16-year sentence, rather than the customary concurrent sentence arrangement. Delgado has been in custody since 2012.
Posted by Kenneth Rijock at Thursday, October 05, 2017