CONGRESS TRIES TO TAKE A BITE OUT OF BULK CASH SMUGGLING 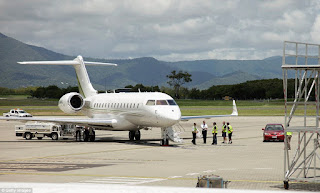 Quick: what's the most effective, and often safest, way to place the proceeds of crime in North America ? Answer: avoid the banking system altogether, and bulk cash smuggle the loot out of country on a private jet. Bulk cash smuggling of the proceeds of crime remains a major method through which money launderers repatriate bulk cash. Now, the US Congress is attempting to close some of the loopholes that foreign money launderers, and their clients, have employed for years to allow them to own, operate and control N-numbered (US registration) business jets.

The Federal Aviation Act requires that foreign nationals may hold no more than twenty-five (25%) per cent of the shares of a US corporation that owns an N-number business jet, but laundrymen use trusts, business associations, shell companies, partnerships, and other private entities to control American-registered aircraft, whose regular traffic in and of the Continental United States is not monitored to the extent that foreign-flag aircraft often are. In truth and in fact, foreign nationals who are career criminals control US-registered aircraft.