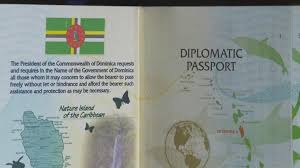 The strenuous public denials, made on behalf of the Prime Minister of St Kitts, to the effect that he does not now, nor has he ever had, a diplomatic passport issued by the Commonwealth of Dominica, have raised several questions about Dominica in general:

(1) If the diplomatic passport published on several Caribbean media is bogus, who created it and how did they accomplish this act?  It appears, on its face, to comport with the security features of Dominican identity documents. Was the Opposition party in St Kitts to blame, as has been alleged ?

(2) Was the document actually made in Dominica, by unnamed government staff, and did they use official facilities and technology to do it ?

(3) Why hasn't the Foreign Minister of Dominica confirmed that it is a fake ? Is that because it is genuine ? Check the bloody serial number please, minister, and go public with your findings.

(4) Since Dominica will not list all the 500+ holders of its diplomatic passports, how are we to judge whether it is authentic, or a forgery ?

(5) When will Dominica cancel all the diplomatic passports issued to non-Dominicans, who perform no legitimate diplomatic functions, and are therefore in violation of the Vienna Convention on Diplomatic Relations ?

Dominica's illicit issuance of diplomatic passports, to foreign nationals, presents a clear and present danger to international banks, to countries that could be the victims of terrorist financing, or even terrorist acts,  and specifically to the United States & Canada, who are rapidly becoming tired of this game being played in Dominica.

The final question: does Dominica now richly deserve a FinCEN Advisory on its passports, like currently existd against St Kitts ? I believe the answer should be in the affirmative.
Posted by Kenneth Rijock at Tuesday, October 24, 2017