WHERE IS THE REST OF THE COUNTERFEIT MONEY PRINTED IN GAZA ?

Hamas has announced that it has seized the equipment, and printing press, of a major counterfeiting organization, which was operating in the Palestinian Territory of Gaza. Reportedly, tracking the person engaged in passing a counterfeit 100 Shekel note in Gaza was instrumental in the investigation. Four individuals are in custody. 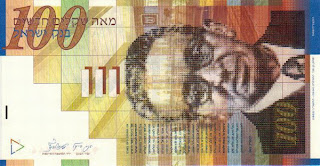 The total value of the counterfeit notes seized was 20m NIS, the equivalent of USD$5.5m. International banks, and forex firms that trade in Israeli currency, should be on the alert for any bulk shipment of notes. Obviously, if 20m was seized, there must be more of the counterfeiters' product in circulation, or stored. Watch for it.