Being the wife of a Ponzi schemer can be hazardous, if prosecutors learn that you have crossed the line from innocent spouse, into criminal activity, they may indict you, long after your husband shuffles off to prison.

Kimberly Rothstein, the trophy wife of convicted Fort Lauderdale attorney/Ponzi schemer, Scott Rothstein, who faces a sentence of five years in Federal Prison, for attempting to conceal from the bankruptcy trustee, and ultimately sell, millions of dollars of jewelry, paid for by the scheme, has had had her sentencing hearing delayed, for the second time.

Mrs. Rothstein, who, along with those of her co-conspirators who have already pled guilty*, is obviously being saved for testifying against those who are taking the case to trial. She will have to suffer the embarrassment of returning to the community, after serving what will be a shortened sentence, where everyone will remember her greedy role in the billion dollar case, for a long, long time. 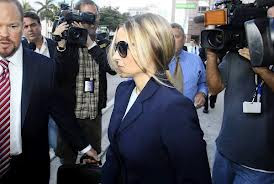