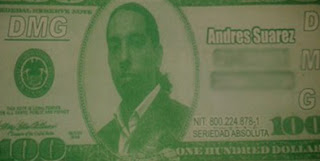 Remember DMG ? A New Colombian criminal enterprise, trading on the the billion dollar Ponzi scheme perpetrated by the convicted DMG owner, David Eduardo Murcia Guzmán, is using the fraudster's likeness, on that bogus US$100 bill advertisement that Murcia created, to sell "investments" promising a 100-150% return on investment. Don't investors in Colombia read the newspapers ?

Murcia, who was convicted in both Colombia and the United States, and sits in an American prison, and who gave the "money" away as an advertising stunt, will certainly be unhappy, when he learns that fraudsters are using his name to fleece the investing public.

I am also wondering what the US Secret Service, over at the  TreasuryDepartment, also thinks about someone selling, through what is represented to be a negotiable instrument, faux US currency, carrying the picture of a notorious Ponzi schemer, where Benjamin Franklin appears on the real note. It may not be an attempt at counterfeiting, but there must be a Federal felony in there somewhere.