MANY PANAMANIAN PEPS ARE NO LONGER WELCOME IN THE UNITED STATES 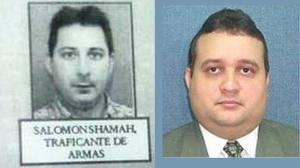 The individual pictured above, on the left, Solomon Shamah, is the Panamanian Minister of Tourism. Yes, that is a Colombian mugshot, for the minister, a naturalized Panamanian, has been linked to arms trafficking in his native Colombia. The other individual, in the photo on the right, is Ramón Martinelli, a cousin of the Panamanian president; he was arrested for money laundering in Mexico.

The dirty little secret among Panama's governing elite: many Panamanian ministers have had their US visas revoked. This extreme action generally takes place only after the US Department of State receives evidence, from a law enforcement agency, that the subject is engaged in criminal activity. American authorities do not want individuals engaged in narcotics trafficking, or money laundering, visiting thre United States, where they could engage in further crimes, or in laundering their illicit wealth.

Some of the former Panamanian ministers have quietly, and quickly, resigned their offices, to avoid visa revocation, but others have decided to stay in power, and have lost their US visa privileges indefinitely. This is one of the reasons to avoid banking Panamanian PEPs, as many are under criminal investigation by American law enforcement agencies.

If you have a high net-worth Panamanian client who advises you that he is sending someone in his behalf, to your US bank, to conduct his banking business, you may want to find out whether he is no longer welcome to visit, and if so, what activities is he allegedly engaged in. Bank clients who hare barred from visiting the United States are too high risk to retain as customers.
Posted by Kenneth Rijock at Tuesday, July 16, 2013