ONE VICTIM STRIKES BACK AT BARBADOS' CORRUPT POWER ELITE ABROAD 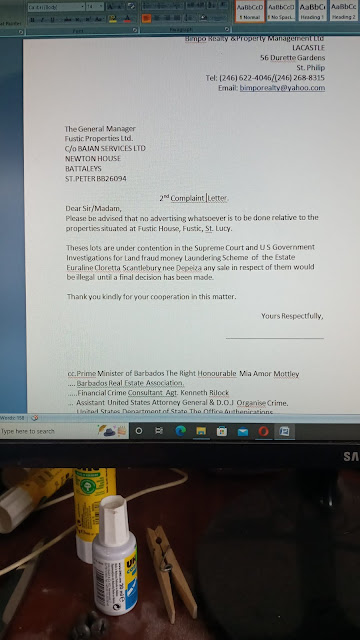 John Wayne Scantlebury, a Bajan businessman who, like many others in his country, has been the victim of Barbados' highly organised (and government-supported) land fraud scheme, but with one important distinction: he is fighting back. Bajans whose birthright, the inheritance of property that has been in their family for generations, has been lost, due to an unregulated predatory attorney class, supported by the country's corrupt court system, who divert real estate holdings during lengthy probate proceedings, or alter or forge property registry records, have lost much of their patrimony.

Mr. Scantlebury, a burly realtor with inside knowledge of the systemic fraud being perpetrated upon he and his fellow Bajans, and who has been an outspoken advocate for reform and restitution, has chosen to seek legal relief outside Barbados, where corrupt judges, influenced by lawyers paying bribes and kickbacks, including sweetheart deals on stolen property, deny justice to ordinary citizens. While we cannot disclose any details, regarding his affirmative actions abroad, he is targeting not only the corrupt attorneys, but their associates and frontmen, all of whom have sucked assets out of the average citizen for far too long. it is time for payback, somewhere that the corrupters cannot have any influence.

Consider this an open invitation to any Bajan who has lost his or her property, and wants to join in on our movement for justice through action abroad, against those who stole from you. We will not broadcast our strategy and tactics, but if you want to come onboard, read our upcoming Part Three of this series for further instructions. We hope to create a national movement to effectuate recovery of what has been lost, and is so dear to the families who handed down their property for generations, only to lose them to thieves wearing suits and using the courts for evil. Join Mr. Scantlebury to get back what is yours.