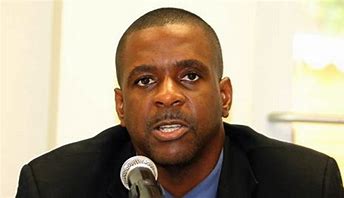 Media reports assert that indicted former British Virgin islands premier ANDREW FAHIE has fulfilled his $1,000,000 bond requirement, and has been released on bail to House Arrest (Home Confinement). Apparently Fahie satisfied the Nebbia requirement, which is satisfying the Court that the Source of Funds for the bond premium was legitimate. A local businessman is said to have posted the bond funds. This information has not been independently confirmed.

Given that the trial has been set for July, the pressure must be on the defendant to conclude a plea agreement forthwith. Facing an imminent trial, he may be forced to enter into an agreement less favourable than one he could have obtained early on. Rumours continue to circulate that Fahie has already given up the names of senior East Caribbean leaders involved in facilitating narcotics trafficking into the US, as well as assisting in money laundering placement.

Fahie must remain within his daughters' Miami residence; his attorneys must meet with him there, he is not allowed to leave the property, except for court appearances. He is required to wear an ankle monitor, and cannot be in close proximity to any transportation hub or centre, such as an airport or seaport.