DOES SOMEONE IN BARBADOS FEAR THAT DONVILLE INNISS, TO GET OUT OF PRISON EARLIER,, WILL FLIP ON HIM ? 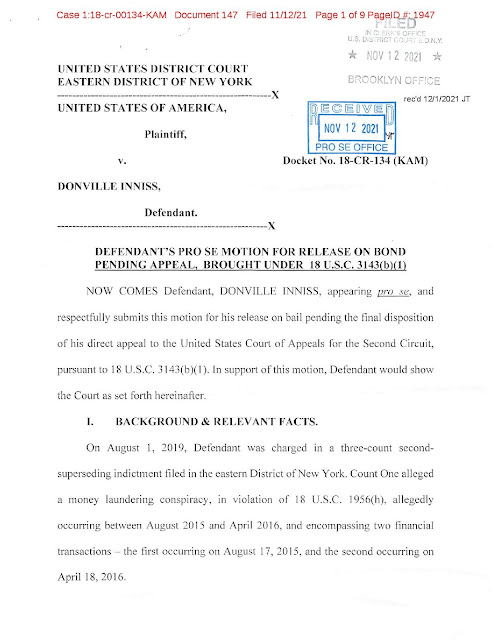 Unless you have what we used to call in the military Attention to Detail, you may have missed the strange fact that convicted Bajan money launderer (and former minister and MP) Donville Inniss' Motion to be Released on Bond Pending Appeal, was filed by him pro se, on his own and without the assistance of his attorney, the noted Miami criminal defence lawyer, Joel Hirschhorn. He has appellate counsel; why on earth file on his own ? The Court ordered that.in the future only the attorney who was a designated counsel for the defendant was authorised to speak for him. 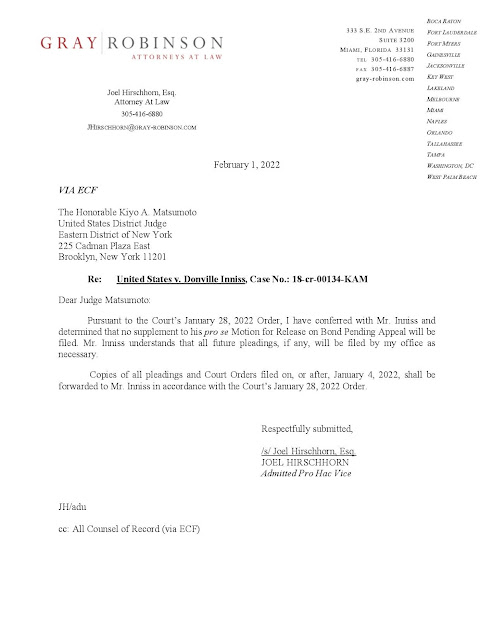 Given the totally professional nature of the motion, which was head and shoulders above any typical motion filed by a criminal inmate who is not an experienced lawyer in Federal Court, it was obviously ghost-written by a member of the defence bar with Federal Court rules knowledge. It also uses a writing style of one who is experienced in District Court, with the use of both the Federal Rules of Criminal Procedure and the Local Rules of the Eastern District. The motion also contains Citations to Authority, meaning case law,that confirm to the Uniform System of Legal Citation, the Bluebook.

Who paid for this and why ? Inniss most likely has spent a lot of money on attorney Hirschhorn. Someone else who knew that Inniss was Unhappy that he would most likely be released (Spring 2023) before his appeal could be heard, badly wanted to get out of prison. Would  he cooperate, in exchange for a sentence reduction, against other corrupt Bajan officials ? Now you get the idea.

We believe that Donville Inniss received legal advice and assistance from a lawyer paid by a third party, to prevent him from cooperating against that, and other parties, to prevent him from talking. Unfortunately, the Motion was denied, so the whole thing may have been in vain. Will Inniss inform against an associate, to obtain an early release from prison ? As we always say, there's no honour amongst thieves.