A favourite tactic of the corrupt power structure in Barbados is to file criminal cases, with no legal merit whatsoever, against the country's most vocal victims of land fraud. The cases are filed with the intent to either silence the victims, through fines or imprisonment, or to cause them to lose all credibility in the eyes of the public, due to criminal convictions on their record. We call this dirty procedure Shoot the Messenger, and it often works to silence Bajan voices crying out against corruption, money laundering, and fraud.

One such individual who will not be silent is the real estate agent and property manager, John Wayne Scantlebury. John was charged last year in a completely bogus and politically-motivated case, filed in connection with a landlord-tenant matter, where the tenants defaulted, and Mr. Scantlebury was charged with enforcing the rental agreement. He was, and is, totally innocent, as we have reviewed the evidence and court filings. 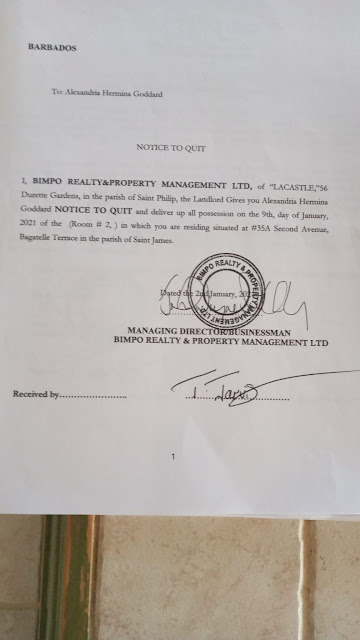 The usual dilatory tactics have been employed:

(1) Multiple delays in the case, all caused by the sitting judge. The case has been pending for fifteen months.

(2) Witnesses or "victims", meaning complainants, repeatedly not appearing in court when they are supposed to be there.

All these cute tricks, which are the way whistleblowers and vocal victims are treated in Barbados, all target individuals that the government, and the predatory, corrupt, thieving lawyers who make their living through crime, in coordination with government officials, instill fear into the hearts of honest people in Barbados, who are victims of a corrupt system, rigged against them. Something needs to be done, either domestically, or externally, or Bajans will never receive justice.