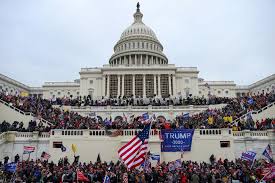 The multiple ongoing investigations and criminal indictments that are being brought against the individuals who committed the attack upon the United States Capitol on January 6, 2021 have resulted in the diversion of all major Federal resources towards those cases, which are considered to be absolute priority, over and above most other open matters. News reports state that though literally hundreds have been charged, that many more are being sought, or are under investigation, or are in the process of being identified. finding and charging the perpetrators of the Capitol attack has comply occupied Federal prosecutors.

The FBI, whose online posting of photographs of the alleged perpetrators have resulted in thousands of tips from concerned citizens, have even taken to having billboards erected, in an effort to learn the identities of some of the major investigative targets. Simply identifying some subjects by name has reportedly proven difficult,  as many to not have criminal histories, and others cannot be found using facial recognition software.

This massive dragnet, which is not limited to the District of Columbia, but is a nationwide project, has resulted in many pending matters being postponed. A check of the News pages of the US Attorney's office websites in major cities show the total focus upon the Capitol cases, and most of the stories concern the indictment and arrest of Capitol defendants.

A complicating factor in these cases is the  COVID-19 pandemic, which imposed restrictions upon air travel, increased the difficulty of locating subjects whose address of record may have changed recently due to unemployment, deaths in the family, and change of employment, and additional factors making the apprehension of individuals who have been indicted more difficult.

Other pending investigations, and the unsealing of indictments in prior cases appear to have been postponed until the Capitol defendants have been charged. While the delays in other cases may cause concern, especially among victims, the Department of Justice, which does not do politics,  has its priorities. Those other cases will eventually get filed, and justice will be done in those matters. The DOJ may sometimes seem slow, but when it gets going, it is a thing to behold.