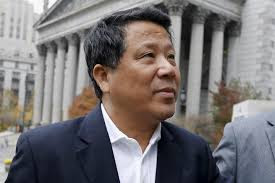 The US Attorney's office in New York has filed a lengthy Memorandum of Law of the United States of America in Opposition to Defendant Ng Lap Seng's Motion for Release, arguing that Ng's motion must be denied for failure to exhaust his Administrative Remedies, and that he has not demonstrated extraordinary and compelling reasons for his immediate release.

The lengthy memorandum notes:
(A) The First Step Statute, which Ng is relying upon, has an Exhaustion of Remedies requirement that is mandatory, and contains no exceptions. Ng has failed to comply with the requirement that he first seek relief from the Bureau of Prisons.
(B)  Ng's exceptions argument fails, as his citations to legal authorities were not precisely on point, as are distinguishable.
(C) Applicable law under Section 3582 requires medical conditions that the defendant, whose heart disease and diabetes are stable snd manageable, and are being properly treated, does not have such extraordinary and compelling reasons for immediate release. it is noted that he actually runs six miles several times a week. he is neither terminally ill, nor unable to self-care at the institution.
(D) The place where the Defendant is incarcerated, Allenwood Low, has no COVID-19 infections or deaths, and is low security. The Bureau of Prisons has a detailed program to protect its inmates; and is mitigating the risk.
(E) The defendant has served less than one half of his sentence, for a serious crime, which does not qualify him under the statute, which requires 75% or ten years' incarceration served.
(F) To say that he would be at a lower risk of being infected with COVID-19 if he was released to home confinement, is speculative. In any event, the fact that he has an ICE immigration detainer means that he cannot be released to such an arrangement. he would have to be released to Time Served, at which point he would be deported to China.
Posted by Kenneth Rijock at Tuesday, April 14, 2020