GOVERNMENT IN ALI SADR CASE DELIVERS DISCOVERY AFTER VERDICT, BUT UNFAVORABLE TO DEFENSE


On March 31, several days after the verdict was handed down in United States vs. Hasheminejad, Government prosecutors delivered to defense counsel a recording of an interview, conducted in Toronto in January, of the defendant's employee, Bharam Karimi.  Apparently, through a mix-up, the FBI agent holding the recording mistakenly advised that it was "in transit," when it had already arrived.

Readers who have been closely following the case from Malta need not be alarmed, for the FBI notes of the interview were furnished to defense counsel several months ago, so the recording is not a surprise to them. Additionally, Karimi's testimony incriminates Ali Sadr in several places. Inasmuch as it does NOT tend to show or prove his innocence, it did not violate Brady v. Maryland , in our humble opinion, and is not grounds to set aside the verdict on appeal. Had it been available to the defense, it most certainly would not have affected their conduct during the trial, and resulted in an acquittal.

We have read all eight pages of the FBI agent's interview notes, and the statements of Karimi are very damaging to Ali Sadr. Shortly after this interview, Karimi was indicted in the Southern District of New York. The charges filed against him, which could land him in Federal Prison for 65 years are:
(1) Conspiracy to Commit Bank Fraud.
(2) Bank Fraud.
(3) Making False Statements to Law Enforcement.

Here is the letter from the US Attorney detailing the issue. 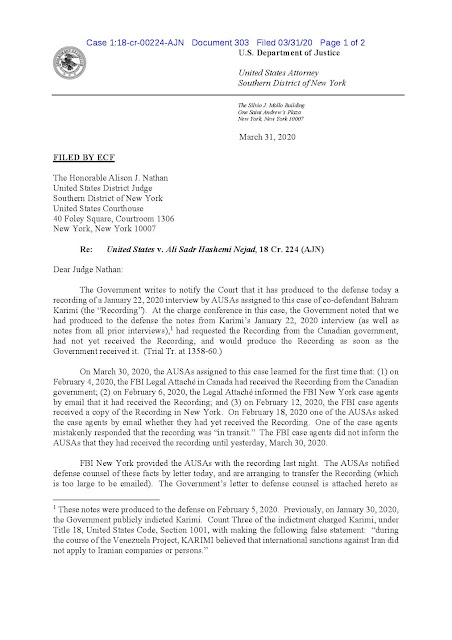 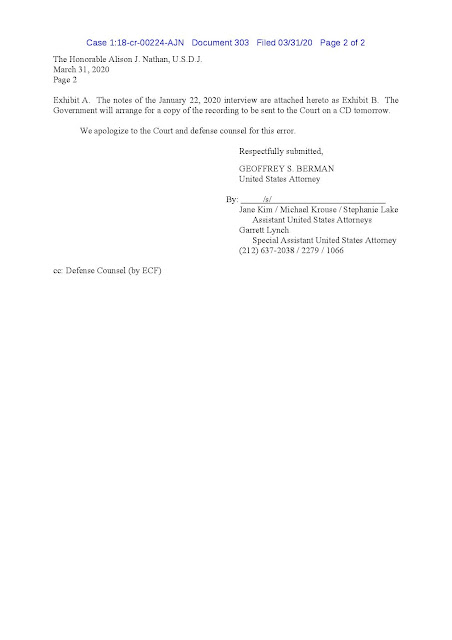