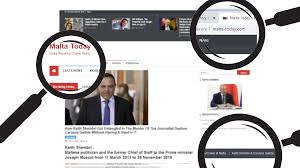 If you had a classical education, you may recognize this quote: Things are seldom what they seem; skim milk masquerades as cream." Anyone seeking accurate information from a well known,  legitimate news website must always be alert to the possibility that articles purporting to be on that site are actually on a deceptively similar site, and with a hidden agenda. Check to make sure the URL matches EXACTLY regarding facts that you intend to rely upon information. Is it really the website you were seeking, or a counterfeit posing as such ?

Keith Schembri, the disgraced former Chief of Staff to Malta's former President Joseph Muscat, who is also alleged to be corrupt, recently sought to clean up his dirty public image. He is drowning in the  Panama Papers, allegations of bribery and kickbacks, the Pilatus Bank scandal, and more. He felt that he needed quick reputation restoration, so he reverted to a typical dirty trick: tell lies on what appears to be an authoritative webpage for news. The Malta newspaper "The Shift News" discovered the mysterious (and bogus) news site.

Schembri, or someone acting under his orders and on his behalf, took the legitimate news website, Malta Today, and created a clone, Malta-Today,  so that he could publish flattering articles about himself, hoping that web surfers would find his placed content, and think that it was from the newspaper website. An article he published there seeks to convince the reader that Schembri is innocent of any involvement in the violent car-bomb murder of the crusading reform journalist and blogger,  Daphne Caruana Galitzia. A more despicable act would be hard to find, if Schembri is later found to have been involved in her murder.

Is Keith Schembri one of the next targets of the US Attorney in New York ? After Ali Sadr Hasheminejad's guilty verdict, a number of sealed filings appeared on the court docket. Question: Did Ali Sadr give up Schembri, among others, in exchange for a reduced sentence ? Stay tuned. We may see him in the dock after all.
Posted by Kenneth Rijock at Friday, April 10, 2020