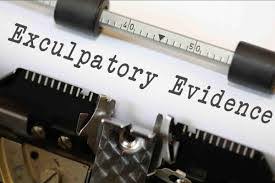 The law firm representing the Iranian businessman Ali Sadr Hasheminejad, the owner of the closed Pilatus Bank of Malta, appears to be planning to move to set aside the jury verdict entered against their client, by alleging the Government committed Due Process Brady vs. Maryland violations. It is not known whether they will move for a New Trial, or to dismiss the case with prejudice, but such tactics are common when there is any chance of success, as the alternative, looking for reversible error on appeal, which is a high bar in most cases where the evidence at trial is strong.

Brady: the Government is required to disclose favorable evidence to criminal defendants. A criminal conviction must be overturned if there is a reasonable possibility that, had the exculpatory evidence been disclosed to the defense, the results of the proceeding would have been different. It must be evidence material to either guilt or punishment. Otherwise, the failure to disclose is merely Harmless Error.

(1) That the complete testimony of Bahram Karimi, which was only made available post-trial, contains exculpatory information, meaning it tends to exonerate Ali Sadr.

(2) That the testimony of Victor Aular, the former CEO of PDVSA, also not made available prior to trial, contained information from a legal opinion of PDVSA counsel, attesting to the legal nature, of any payments made to, or for the benefit of, the defendants.

In response, the Government's position might include these arguments:

(A) Karimi's testimony also contained evidence that implicated Ali Sadr, and he as a co-defendant has serious credibility issues, due to his involvement in the conspiracy, desire to minimize his own culpability, and deference probably owed to his boss.

(B) How could Ali Sadr, a sophisticated international banker, rely upon a second-hand legal opinion, from attorneys not admitted to practice before US Courts, that the transactions were legal ? These are Venezuelan attorneys, working outside the US, and most likely also not educated in American law schools.

The defendant has the right to a Fair Trial. Should the Court deny a Motion to Dismiss, and a Motion for a New Trial, you can expect that the Brady issue will be the principal argument on the appeal. 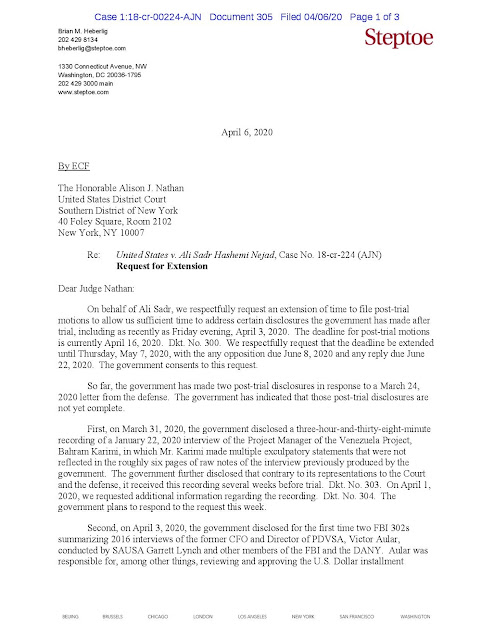 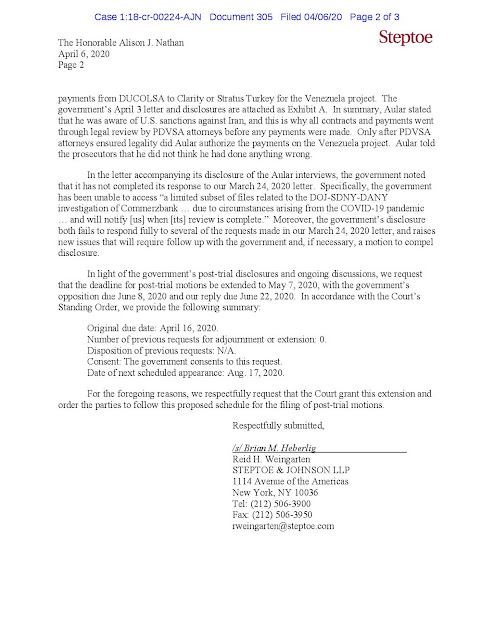