AMERICANS WORKING AT AN IRANIAN-CONTROLLED BANK IN MALTA ? SAY IT AIN'T SO, DOJ 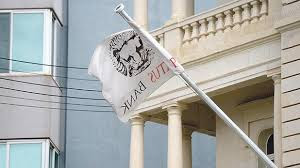 This has to be a first; American citizens, who are known to have been officers and directors at Malta's corrupt, scandal-ridden money laundering Pilatus Bank, have thus far not been indicted in the United States, even though the bank's owner has been convicted on multiple counts. The bank's misconduct, which caused it to lose its EU license, was widespread, not the least of which included Iran sanctions evasion.

While legal observers might point out that Federal criminal investigations typically take a number of years to complete, and generally end up with a strong, bulletproof case, why weren't the Americans at the bank charged with Ali Sadr, initially, or through a Superseding Indictment, over the past two years ? What's wrong with this picture ?

Our recent article about bank officers & directors, which included photographs through which compliance officers can properly identify them, takes these individuals out of the shadows, and into the light.
Posted by Kenneth Rijock at Thursday, April 02, 2020