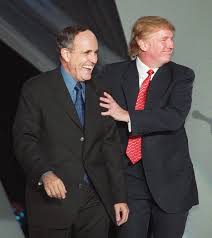 The unsucessful political efforts, on behalf of the indicted Iranian oil sanctions violator, Reza Zarrab, reportedly conducted with senior government officials in Turkey by Rudolph Giuliani, whose co-counsel are said to have minimized their client's role in the $400m international sanctions evasion scheme, by labeling Zarrab's acts as only involving "consumer goods," which flies in the face of the superseding indictment, alleging Zarrab's support for both Hezbollah and the IRGC, specially designated global terrorist organizations. The US Attorney's Office in New York has, according to published reports, disputed this effort to portray Zarrab in a lesser light.

One report says that Rudolph Giuliani's strategy is to enlist Turkey in a cooperative campaign against ISIS, and argue to senior US officials (NOT Department of Justice) that the release of Zarrab to Turkey, as part of an omnibus agreement between it and America, would be in our best national security interests. In essence, he wants to give Zarrab a "Get out of Jail Card," in an arrangement through which US interests are better served in the Middle East, by Turkish military action.

Whether you agree that this maneuver smells of backroom dirty politics, it doesn't appear to have worked, the US Attorney in Manhattan is moving forward with its case, and since we have seen no evidence of plea negotiations, we must assume that the case will, ultimately, go to trial. Of course, inasmuch as Zarrab is looking at 75 years, or more, of imprisonment, he may still decide to cooperate, and in that event, all the other conspirators in his organization, Zanjani, Monfared, and others, may find themselves as co-defendants sooner, rather than later.
Posted by Kenneth Rijock at Wednesday, April 26, 2017