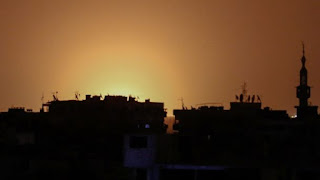 While world media attention was focused on an air attack, upon what has been described as an arms shipment, located near the Damascus airport, of advanced weapons said to be destined for Hezbollah, another operation received no media coverage, probably due to the sensitivity of the location; inside Lebanon, to the probable dismay of the Beirut banking community, if word got out.

Actually, details of the earlier arrival, at the Damascus Airport, of two IL-76 cargo planes, one Syrian and one Iranian, which may have ferried the advanced weaponry destroyed, as it was destined for Hezbollah, appear to further focused attention on the Damascus attack, said to have come from Israel. Was this an effort at news management, to insure that the Damascus attack capture the exclusive attention of the media ?

Information received, from a totally reliable source, indicated that there was a second attack, at a location inside the Lebanese Republic, at a site controlled by Hezbollah, and that a facility that stored munitions and weapons, was destroyed. Obviously, coming on the heels of statements, from Lebanese leaders, that they control their country, and its borders, after a Hezbollah "guided tour," of the frontier with Israel, Lebanon does not want to admit that an attack even took place, let alone that munitions were located, targeted and eliminated.

If the attacks upon Iranian-supplied weapons that Israel does not want Hezbollah to possess will now be conducted against Lebanese targets, and not exclusively within Syria, then the risk of armed conflict increases, as does Country Risk, for Lebanon's most precious resource, its Beirut financial center, is a prominent potential "infrastructure target," of Israeli warplanes and missiles, as repeatedly promised by senior military officers, if Hezbollah starts yet another war.