A NEW DICTATORSHIP EMERGES IN THE EAST CARIBBEAN 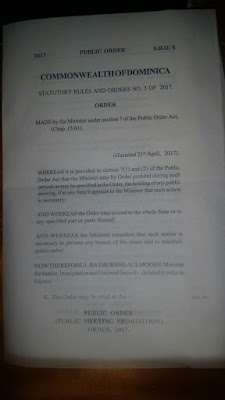 The right of peaceable assembly may be one of the cherished rights of the English-speaking countries, but this week it was abolished in a country that must now be regarded as a former democracy, now rapidly becoming a dictatorship. The population of the Commonwealth of Dominica has now, by decree, lost the right to assemble, and discuss their grievances.

Today, April 24, 2017, the Minister of Justice, Immigration, and National Security enacted a regulation that enables him to ban any public meeting, assembly or demonstration. He then used this new & absolute power to forbid an assembly, to be conducted by Opposition parties. It is all displayed above and below. 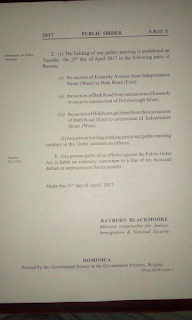 Democracy fades out, in Dominica, and dictatorship becomes the order of the day. if you have been reading any of the articles that I have been posting of late, you have seen the deterioration of the rule of law in Dominica, and the rise of autocratic rule. This one act, which has codified the acts of the local government in 2017, is the beginning of the end for democracy in Dominica.

For  foreign investors, eco-tourists, yachtsmen, and other travelers, the risk levels have flown off the chart, given the rampant corruption, vote buying, sales of passports to all comers, and general fear and loathing. For international bankers, Country Risk has risen so high as to make it a jurisdiction to avoid, leaving the population high and dry, while the corrupt national leadership rakes in their lucre.

Welcome to Dominica; for risk management purposes, it is the new Haiti; a kleptocracy. 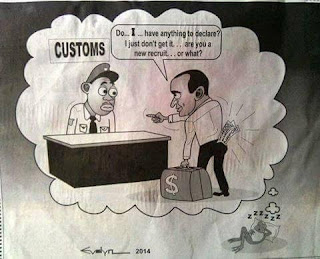