MOSSACK AND FONSECA SUE THEIR INSURANCE COMPANY FOR DENIAL OF COVERAGE 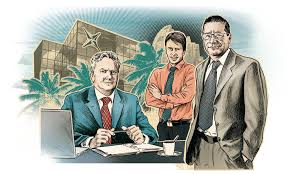 The imprisoned name partners of the Panama City law firm of Mossack and Fonseca have filed a suit against their insurance carrier, after it denied the firm coverage on a policy, due in part to the accusations of money laundering, and after the insurance company declined to provide addition specifics, regarding denial of coverage on its policy. The firm did not announce the lawsuit; it was spotted by journalists in Panama who were covering the government's continuing investigation of the law firm, who reportedly artfully concealed, and laundered, drug profits, illicit bribe proceeds, tax evasion funds, and many other types of illegal wealth, on a global scale.

The law firm has long asserted that public release of the Papers was a violation of attorney-client privilege, but in the opinion of most legal authorities, and the law in many jurisdictions, the privilege does not apply when the attorney and clients are jointly engaged in criminal activities; it is known as the crime-or-fraud exception.

Mossack and Fonseca, asserting that it has suffered reputation damage, due to the release of the Panama Papers, and subsequent criminal investigation, brought the action, seeking $8m in damages, plus costs and fees. Allegedly, the firm's business has declined by 50%, since the Panama Papers scandal broke; it has laid off or terminated most of its employees. Many of its far-flung low-profile remote offices, located in other tax havens, as well as onshore jurisdictions, where it sought clients, have closed.

Whether the insurance company was justified in denying coverage on the policy raises issues of both law and fact, and we will be closely following it, and other related events, as the criminal case against the  principals of Mossack and Fonseca progresses. All counsel's efforts to have their clients released on bond have failed, due in part to the discovery that the law firm was destroying evidence on a grand scale, even secreting shredded internal documents in a private residence, to avoid detection and seizure.
Posted by Kenneth Rijock at Tuesday, April 18, 2017