If you have been following the ongoing controversy involving the Citizenship by Investment, or economic passport, program, of the Commonwealth of Dominica, you may have seen that the country's Prime Minister, Roosevelt Skerrit, recently traveled to China. While there, Skerrit, according to media releases, met with a prominent Shanghai-based firm that specializes in high net-worth Chinese. The joint press releases discussed creating Chinese investment in Dominica.

What is not mentioned is the new focus Dominica has placed on securing Chinese investors for its economic passport program. In fact, Dominica participated in the 2017 International Migration Summit in Shanghai, which just concluded on April 21, 2017.

Here's the problem: Chinese names must be converted into roman letters, for the purposes of passports from English-speaking countries, and the complex issues involved allow criminal elements, governmental officials, and even potential terrorists, to artfully conceal their true identities. there are several important issues, all of which could bar a compliance officer, at an international bank, from learning the applicant's true identity, at account opening, exposing the bank to increased risk of money laundering, or terrorist financing.


(1) The romanization of a Chinese name, to a Western name, offers a career criminal, or other undesirable applicant for a Dominican passport, an opportunity to create a totally new identity, whether by altering the spelling, deleting one or more letters, adding a Western name, and moving the given name to middle name status (which is common), effectively rendering any enhanced due diligence ineffective at best, and a total waste of time, at worst.

(2) Unlike in the West, mainland Chinese also may have acquired additional complete names. These are not just nicknames,  though many exist, but are classified as official "school names,'  so-called courtesy name, and even pseudonyms, all of which complicate the due diligence process.

Add the name issue to the fact that Chinese face significant legal obstacles to moving their wealth offshore, to tax evasion schemes, to efforts of Chinese Politically Exposed Persons (PEPs) to send the proceeds of bribes and kickbacks out of the reach of Chinese authorities, and you have a potentially large  class of "investors" who believe that they must obscure their identities to the West.

Of course, the appointment of agents, without any professional qualifications, or oversight by government, who are the only avenue available to applicants, complicates the matter further, Look at this notice, posted by the CBI unit for Dominica. It is practically offering to obtain identity documents for his clients' applications, which guarantees that the names offered will not be the true names of the clients. 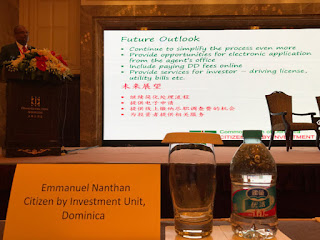 If I am a compliance officer. at a North American or European bank, and run the name of a "Chinese Dominican" passport holder, through my due diligence resources,  his or her real identity, whether it be criminal or not, PEP or not, most likely will not be discovered. If you contend that the original Chinese name should also be checked, exactly how many international banks have Mandarin-fluent compliance officers, and where are they to obtain competent information on Chinese nationals, when the Peoples' Republic controls the media?


Operating a risk-based compliance program means that, should you encounter any passport holder, who was not born in his "adopted" Caribbean country, which happens to award economic citizenship, you must institute enhanced due diligence. If the individual is Chinese, you may have no choice but to decline the account, lest you open a relationship with an individual whom you later learn poses a clear and present danger to the bank.
Posted by Kenneth Rijock at Sunday, April 23, 2017