COURT RULES AGAINST WAKED ORGANIZATION IN ITS SUIT AGAINST OFAC 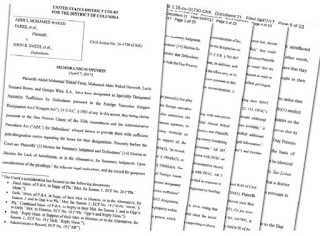 The US District Court for the District Court for the District of Columbia has entered a summary judgment, in favor of OFAC, the defendant, and against the Waked plaintiffs,  in a case where the plaintiffs accused OFAC of violating Due Process, and the Administrative Procedure Act (APA). The Department of Justice refers to their organization as the Waked Money Laundering Organization, and accuses it of laundering Colombian and Mexican narco-profits, through Panama.

The Waked family, one of whom has been charged with money laundering, and extradited from Colombia, have been named by OFAC, as Specially Designated Narcotics Traffickers (SDNT), and as a number of their corporate entities have also been sanctioned, which has resulted in major economic issues in the Republic of Panama, as some are major commercial businesses, with a large number of employees.

After a failure to have the sanctions against the plaintiffs removed, and to have their motion for reconsideration heard thereafter, the plaintiffs brought this action, asserting that the failure of OFAC to give them information not unclassified or non-privileged, violated their Due Process rights, as well as the Administrative Procedure Act.

Some observers have noted that the suit was most likely an attempt to obtain information about the potential criminal liability of the plaintiffs, and others in their organization, through civil discovery; there is not provision in the Federal Rules of Criminal Procedure, requiring such disclosures pre-indictment, or even generally during most ongoing proceedings,  and the suit was allegedly designed to obtain information, through the "back door," so to speak.

Whether the filing of such a claim, by a criminal money laundering organization, against whom the Government reports there is overwhelming evidence, is indicative of complete and total arrogance, on the part of the plaintiffs, is another issue we intend to cover in a future article. Are their sanctions available to punish, and even deter, such conduct, by foreign nationals ?

The District Court found that the plaintiffs were afforded sufficient procedural due process, under the circumstances, and that OFAC had followed its own rules and procedures, under the APA, and entered summary judgment. the plaintiffs have filed a Notice of Appeal, so we have not heard the last of the Waked plaintiffs, on these issues.