IS THE CHINESE EMBASSY IN DOMINICA SPYING ON THE UNITED STATES ?

This is the Embassy of the Peoples' Republic of China in Dominica. According to local sources, this structure has a very high degree of security. It is located in an exclusive residential area, Morne Daniel, and it is protected by a special paramilitary unit of the Dominican Police Force, the Special Service Unit, or SSU. Locals, who are unable to see past the solid wall, report that they are intimidated by the sinage, as well as the SSU palace guard outside, discouraging visitors. 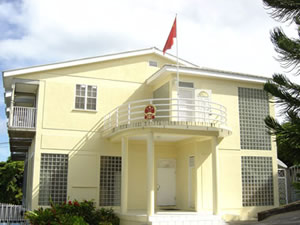 Considering that, outside of the rare Dominican university student, attending school in China, the embassy serves no practical function. The amount of international trade between the two countries is negligible, and outside of Dominican Prime Minister's trips to the Peoples' Republic, there's little or no international commerce, tourism or exchange. it is far too large for its official function, as an embassy, and to provide consulate services. So why is it there ?

When Dominica's left-leaning, and often declared anti-American, Prime Minister, Roosevelt Skerrit, unilaterally withdrew his country's recognition of Taiwan, and established diplomatic relations with China, the two countries embarked upon a relationship which appears to be only at the highest level.  Dominica is actively pursuing high net-worth Chinese, for the country's Citizenship by Investment (CBI) economic passport program, as well as "investors, " though national agriculture took a severe hit during a 2015 tropical storm, and there is no other established industry; even tourism is a small factor.


The obvious conclusion is that the Government of China is using the embassy as a protected  listening post, under diplomatic cover, focused upon the East Caribbean region, as well as the United States, to gather intelligence, whether electronically, or through use of human assets. considering that the United States has one embassy in Barbados, serving no less than six East Caribbean nations, China's footprint in Dominica is large, indeed.

The embassy also exists to exercise, and expand Chinese influence, for an emerging China is seeking to acquire a global reach. Whether its power, and opaque goals, will adversely affect the people of the Commonwealth of Dominica, we cannot say, but this curious embassy bears watching. Does anyone out there remember the Grenada invasion ?
Posted by Kenneth Rijock at Wednesday, April 26, 2017