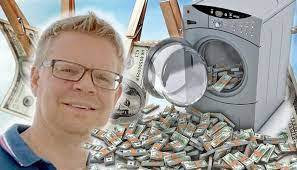 When the former Swiss banker, Matthias Krull, had his Federal sentence reduced from ten years to just three and one-half years, that court order got the attention of a media that usually ignores sentence reduction decision, because they generally are not for more than 50% of a cooperating individual's original sentence, and are not regarded as newsworthy. Krull's case was covered by major media because it was, frankly, extraordinary. and unusual. It appears that it was granted due to the fact that he had cooperated  extensively against a number of Venezuelan money launderers, for whom he moved and cleaned $1.2bn in criminal proceeds.

There is a question, however, about his current status; when Krull surrendered, to commence serving his sentence, the public record on his status appearing on the Bureau of Prisons website showed his Release Date, the date his sentence was up, to be late in 2029, which would be the computation of his release had he NOT received that huge sentence reduction. The information on when a Federal inmate is eligible for release is maintained in the BOP SENTRY Inmate Management System, and I guarantee you that, when Krull received that sentence reduction, his eminently qualified attorney would have insured that his records were updated, forthwith.

If the Bureau of Prisons is strict about one thing, it is maintaining correct records on inmate Release Dates, lest someone be released early in error, which can have major consequences to the careers of government officials who make that mistake.  One important case, in which an error was discovered years after an inmate was released in error, held that an inmate was not required to serve his sentence in installments, and denying the BOP and DOJ the right to return him to prison.

So what's going on here ? Is Krull to be released in just under three years (with the 15% Good Time), or is he doing the eight and one-half years that is what a ten year sentence ends up being ?

There's one more element to this mystery; there is a sealed document in Krull's court file that is not scheduled for public release until early 2023. Are their conditions on his sentence reduction, or some other factor that the Department of Justice does not want known, regarding his future obligations to testify against additional targets, or some other condition precedent to his reduction ? Some legal observers have opined that he is a key witness in the movement of a portion of that $1.2bn through banks and financial service companies in the Republic of Malta, and that he will required to help obtain convictions of the guilty parties through his trial testimony.

It could also be that Krull is involved in the seizure and forfeiture of significant criminal proceeds abroad, and his ultimate sentence is contingent upon a success in that operation, if it exists. We cannot say, as the document remains sealed.

Another possibility is that the second. sealed order, reduces his sentence to Time Served, meaning whatever short amount of time he serves in 2021 will be all he is obligated to do. In essence, it will be the proverbial Get-out-of-Jail-Free card, which may not serve as a sufficient deterrence to other considering money laundering.

So what's the story ? At this moment, it remains a mystery; We shall be monitoring Matthias Krull's case, and when we have the answer, you will read it here first. Stay tuned.