IRS PLACES MALTA ON ITS "DIRTY DOZEN" OF TAX SCAMS; WILL US NOW CANCEL ITS TAX TREATY ? 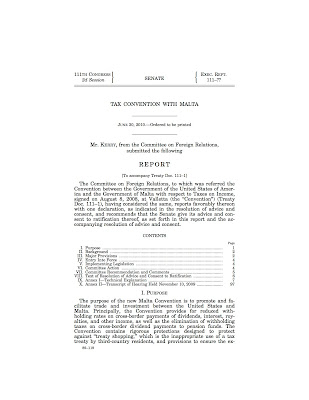 Malta and the United States currently are parties to The Convention between the United States of America  and the Government of Malta for the Avoidance of Double Taxation and the Prevention of Fiscal Evasion  with respect to Taxes on Income, the current Tax Treaty, signed in Valletta on August 8, 2008, ratified by the US Senate on June 30, 2010, and effective January 1, 2011. The treaty, in essence, prohibits double taxation of the same income by both nations.

This week the Internal Revenue Service published the latest edition of its "Dirty Dozen" of abusive tax practices, and named Malta as one of the offending jurisdictions. What follows is the complete text of the IRS section on Malta, which can be found in its website:

Potentially Abusive Use of the US -Malta Tax Treaty

" Some US citizens and residents are relying on an interpretation of the US-Malta Income tax treaty (Treaty) to take the position that they may contribute appreciated property tax free to certain  Maltese pension plans, and that there are also no tax consequences when the plan sells the assets, and distributes proceeds to the US Taxpayer. Ordinarily, gain would be recognized upon disposition of the plan's assets, and distribution of the proceeds. The IRS is evaluating the issue to determine the validity of these arrangements.and whether Treaty benefits should be available in such instances, and may challenge the associated tax treatment. (emphasis supplied)."

Whether these abusive tax practices case the United States to terminate the present tax treaty is a distinct possibility. Readers who are familiar with US-Maltese relations will recall that the previous tax treaty between the two counties "was terminated by the United States on January 1, 1997, due to concerns that changes to Maltese tax laws provided an incentive for "treaty shopping" and that Malta was unable to satisfactorily exchange tax information." Report on Tax Convention with Malta at 2.

Given the obviously strained state of diplomatic relations between the US and Malta, due to the unsatisfactory result of the meeting lat year, between the then-US Secretary of Defence and Malta PM Robert Abela, concerning the SOFA matter, the IRS may enter a ruling rejecting the validity of the Maltese technique as legitimate tax avoidance, or the US could, as a result, terminate the present 2010 Tax Treaty. Obviously, PM Abela did not consider the possible adverse tax consequences of his reportedly rude and abrupt rejection of the US offer, after making seemingly friendly overtures to the US, resulting in the arrival of the US Sec Def, with a full compliment of his staff, in Malta.

We shall be closely monitoring the IRS position on its 'Dirty Dozen" of tax abuses, and shall report back to our readers  should a ruling be handed down, or some official action be taken on the Tax Treaty.