MALTA WONDERS; WHO WILL CHARGE JOSEPH MUSCAT, AND WHEN ? 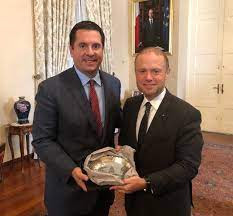 It has become vogue of late, among Maltese discussing the current state of runaway money laundering and corruption in their country, to estimate when, if ever, their former Prime Minister, Joseph Muscat, who resigned in disgrace,will be indicted abroad. The issue, which is the subject of an at times heated debate, deserves to be covered on this blog.

Many in Malta had hoped that, once the Trump Administration, some of whose leaders were rumoured to be linked to Malta's Labour Party, left office in January, that criminal charges against Muscat, in a US court, would soon appear. They recalled, ruefully, that cases which they had expected to materialize against Maltese money launderers never were filed, and they they pinned all their hopes on the United States.

Maltese now  fear that Muscat will, again, cheat justice, as six months after the leadership at the Justice Department there has been no indication that he will ever see the inside of an American courtroom. They are impatient,, but they do not understand that the US criminal justice system, at least for Federal cases, often takes many months, or even more, to build a bulletproof case, with both documentary evidence, and cooperating witnesses to confirm that information. There are no shortcuts at law, though the Maltese public truly wish that justice, regarding Muscat, be done, and promptly. Unfortunately, that's not always how it works.

To those who think that Muscat will, literally, get away from murder, have faith that, sooner or later, and usually later, he will have to face the legal consequences for his actions. Just when you think that his case has been passed over, you will see that he is going to be called to account for his sins in a court of law; stay tuned.