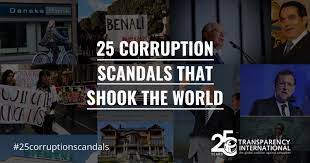 The NGO Transparency International has fingered Malta as the primary actor in the $1.2bn Venezuelan embezzlement and money laundering scandal, listed as one of 25 Corruption Scandals that Shook the World. Whether this is more damaging to Malta than the award to Joseph Muscat, for being named the Most Corrupt Government Leader in Europe has not yet been established, but it is a stain upon the country's reputation and good name, such little as remains after the Daphne assassination and Panama Papers.

Our readers are quite familiar with the case, so we have chosen to quote from the report, which speaks for itself:

"We know that a very large part of the money first went to Malta, namely to shell companies, which had 'nominee' shareholders, straw men to whom the companies belonged - but only on paper."

"From Malta, they then reportedly invested this money in different businesses. For example, they invested in bonds issued by a company, or they reportedly invested on a grand scale in real estate in Spain. Or they transferred it through so many banks that the sender was no longer recognizable..."

This, then is Malta's true purpose, layering criminal assets, and then investing the cleaned funds. Do you think OFAC will impose sanctions upon Malta ?