AFTER DOMESTIC ABUSE ALLEGATIONS APPEAR, WILL MALTA NOW FINALLY TAKE DOWN HIS STATUE ? 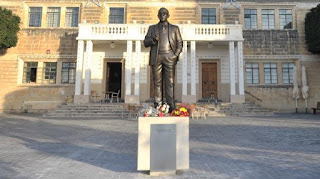 In the United States, Americans are taking down statues of former public figures and military officers in record numbers, as we face up to darker periods in our history. Officials who supported slavery, and military men who sought to perpetuate an evil breakaway nation, composed of states where the abomination known as slavery was legal, are being taken down. Wisdom has prevailed, and those figures have been rightfully relegated to the history books.

This week's disclosures, regarding the personal life of Malta's first Prime Minister, Dom Mintoff, have reopened an old wound festering in the country, and one which should be healed through action. Mintoff, according to his biographer, who interviewed dozens in search of the truth, was guilty of engaging in Domestic Abuse over a period of many years, involving his wife and family. Both physical and mental abuse has been alleged, as well as inability to contain his anger at them, and rendering insults daily towards his loved ones.

Perhaps just as egregious are the repeated offenses of Adultery, excused by his Labour Party associates, but demonstrating the complete lack of a moral compass. In a country that is 99% Roman Catholic, and where he deliberately and repeatedly interfered with the church's good works, because he feared its moral power, his years of Adultery have disqualified him for the reverence which his supporters still assign to him.

We are not even getting to his years of autocratic Socialism, at times verging on Communism, his relegation of Malta to a pitiful "neutral" status, at a time when the Free World was engaged in an existential battle with the dark forces of Communism. He is the reason for surges of emigration, are evidenced by the massive number of expats living permanently in Australia; others left hurriedly for the UK, and other European and North American countries. His sins are, frankly, too numerous to mention.

It is high time that Malta's own version of Joseph Stalin be relegated to the dustbin of history. Please, take down his statue; it can be reinstalled within the facilities of the Labour Party, should he still have followers who believe he was a heroic figure. but it has no place in  the modern Malta of 2021.