HOW MANY FINANCIAL CRIME INDICTMENTS WERE INTENTIONALLY SHELVED BY TRUMP APPOINTEES AT DOJ FOR POLITICAL REASONS ? 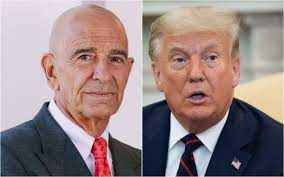 Today's reports, regarding the back story behind this week's indictment of Thomas Barrack, the chairman of Trump's 2017 Presidential Inauguration Committee, is extremely disturbing. The US Attorney for EDNY allegedly blocked Barrack's indictment for purely political reasons, long after it should have been filed. To add insult to injury, that individual was actually promoted by then-AG William Barr, to a senior position at Main Justice in Washington. Should he be removed, if the evidence proves the allegations are correct ?

This raises the question: just how many major financial crime cases were prevented from being filed, by Trump political appointees in the Department of Justice, just because the targets included:

(3) financial supporters of the Republican Party.

(4) Individuals who have ongoing, or prospective, business relationships with the Trump Organization.

While we understand that present Attorney General Garland has gone out of his way to distance himself from political issues connected to the former President, he had better create an internal task force to examine whether legal or ethical policies of the DOJ were violated, concerning political decisions to give criminals a pass, due to Donald Trump's orders.