WHAT'S WRONG WITH THIS PICTURE ? 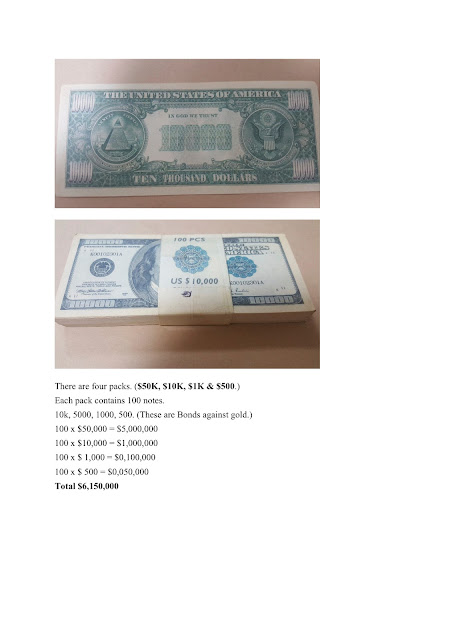 This instrument appears to be a Series 2006 USD$10,000 note, notwithstanding that the United States has not issued any such bill since the end of the Second World War. and Benjamin Franklin has never been pictured therein. It is represented to be a "gold-backed US bond," in the Republic of Korea, and the wrapped total of 100 bills is one million dollars. if these were truly bonds, where is the maturity information ? What about interest on the obligation ?

Astute readers will note its similarity to the Series 2006 US one hundred dollar bill, the same series that has recently shown up in Seoul* as a possible new version of the North Korean "Supernote, " the best counterfeit US currency ever produced. How anyone would expect a knowledgeable banker to accept it, for any purpose, especially loan collateral, is beyond my comprehension. The original $100 serial number has not been changed, nor have all the other indicia of a one hundred dollar bill.

For example, US currency always uses commas, and this note has none, in the sections showing value. One the front, there is no spelled-out value, center bottom. as appears on all America currency. The fonts (typeface) used to denote value differs from the rest of the instrument. Finally, "Certification of Payment" has been added to the standard clause regarding the validity of the currency as a method of payment.

Obviously created on a superior printing press, in North Korea (DPRK), as a part of that rogue country's desperate need to acquire hard currency, through fraud, or any other means, it represent a clear and present danger to international banks careless enough to accept it as a means of securing customer debt. Someone needs to, once and for all, disable, capture or destroy that intaglio press, so that the Supernote, and its progeny, no longer appear in global financial markets.


This purports to be a US ten thousand dollar bond
Posted by Kenneth Rijock at Friday, January 26, 2018