An investor from Singapore, who has inquired about placing his money into Inter-Oceanic Bank of the Caribbean, Inc., an offshore bank organized and reportedly operating in the Commonwealth of Dominica, has exposed a newly emerging* financial entity, but one with more Red Flags than compliance officers will ever be comfortable with. 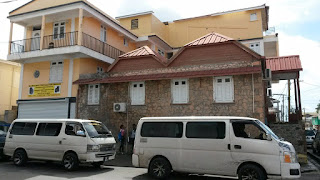 This is the principal office of the bank, as listed on its website, which is quite professionally done, but which tells the visitor absolutely nothing about the bank, its officers and directors, history or correspondent affiliations. There is no sign, or other indication that there is a bank on the premises, meaning that it is what we used to call a brass-plate, and now designate a virtual, bank. There is a sign there, as you can see below, but it is not a banking sign.

It is the chambers of a local law firm,  Williams & Horsford; Partner Kondwani Williams has been in the news of late, as the reputed lawyer of the fugitive international fraudster, and SEC target, Pedro Fort Berbel. Readers who are unfamiliar with that case may wish to access this article: Kondwani's Neck in the Noose.

The property, by the way, fronts on two streets, and also has an address of 30 Great Gorge; the tyre store appears to come back to Lennox Lawrence, a lawyer known to represent the Prime Minister of Dominica, Roosevelt Skerrit, whose sins & transgressions have appeared on this blog many times,


Getting back to the bank itself, there is no information available as to the identity of Inter-Oceanic's beneficial owners, but reliable Panama sources assert that it is Russian Organized Crime, and point to its deceptively similar cousin, Inter-Oceanic Bank of Panama, a fraudulent institution whose banking license was revoked. The Panama bank, now defunct, was owned and controlled by Russian Organized Crime.

The UK telephone number listed on the bank's slick website betrays the fact that it is a virtual bank, run from the United Kingdom, by person or persons unknown, and therefore immune from prosecution. This is a bank that is asking foreign investors for $100,000 minimums, paying interest only for two years, with the entire principal to be returned at that time. Can anybody say Ponzi scheme ? Risk levels are through the roof, if not in the Stratosphere.

Should anyone be foolish enough to risk their capital by investing at Inter-Oceanic Bank of the Caribbean, given this information ? Caveat Emptor.