MARTINELLI FILE REMAINS SEALED: IS IT BECAUSE OF FILMS OF TRUMP'S SEXUAL TOURISM OR AMERICAN COVERT OPERATIONS IN LATIN AMERICA ? 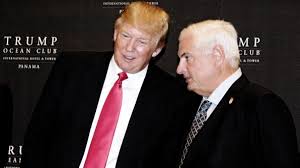 Attorneys for Panama's fugitive former president, Ricardo Martinelli, have requested that he be released on bond, pending his appeal of the denial of his Habeus Corpus petition, seeking to avoid extradition to face criminal charges in Panama. Unfortunately, we cannot supply the details of their motion, because the entire file remains essentially sealed by the Court, which has restricted access through an effective maneuver that denies it to all, without actually sealing the pleadings.

According to knowledgeable sources within the Republic of Panama, and other resources with close access to the international intelligence community, there are two principal reasons why all of the filings remain sealed:

(1) Martinelli has threatened to expose law enforcement sensitive, as well as classified, covert operations conducted by agencies of the US Government, and its military forces, in Latin America & the Caribbean, which if exposed, could seriously affect diplomatic relations with countries in that region, who are extremely sensitive about violations of their national sovereignty. Martinelli's illegal electronic surveillance activities are believed to have uncovered such information, while trolling for blackmail evidence that Martinelli used against his political enemies, and to obtain sexual favors from females fearing exposure of their infidelity to husbands and boyfriends in Panama.

(2) Martinelli reportedly has made it known that he has ample video evidence of sexual escapades, allegedly committed by President Donald Trump, in a number of Panama bordellos, including but not limited to, Club Miami, Le Palace, and Club Bahama. he has allegedly threatened to release such tapes if he is extradited. are some of those tapes now in the hands of Russian organized crime, and is this connected to the Special prosecutor's investigation of Russian meddling in the 2016 Presidential Election ? Given the power of Russian organized crime in Panama, this is a bona fide concern.