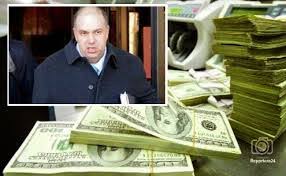 Remember Francisco Illarramendi, who ran two unregistered hedge funds in Connecticut, which soon became massive Ponzoi schemes that cheated PDVSA pension funds out of millions ? Convicted, even after he changed lawyers more often than anyone in recent Federal memory, he still takes up the Court's time with filing totally devoid of legal merit except now he does it Pro Se.

Readers may recall his port-conviction  §2255 petition, his quest to vacate  his sentence and conviction. In that filing, he sought to be released from custody, into Supervised Release, which is a form of supervision, akin to parole, that Federal inmates must serve after they complete their incarceration. It is not available for any other purpose, other than to keep tabs on former inmates, lest they re-offend.

As expected the Court denied Illarramendi's motion, holding " The Court has no authority to grant Supervised Release to a sentenced inmate," on December 22, 2017. Illarramendi then took an Interlocutory Appeal*, claiming, his 2255 petition was in a nature of a Habeus Corpus, as he is contesting his sentence and conviction, and therefore, the Court had the inherent right to release him.