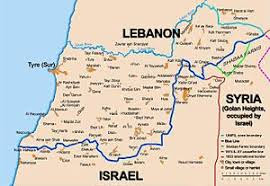 The risk of yet another armed conflict, between the State of Israel, and the global terrorist organization, Hezbollah, which was elevated recently when Hezbollah objected to Israel building a fence between it and Lebanon, has been further elevated, thanks to bogus territorial claims, made by the country's pro-Hezbollah president, Michel Aoun.

The President of Lebanon has publicly stated that his country has objections to twelve areas of the international frontier with Israel. That border, known as the Blue Line, which was designated by the Treaty of Sevres in 1923, and was further mutually affirmed in 1949, 1978, and most recently in the year 2000, is NOT in dispute. This is simply a pretext, a bogus premise, to increase tension, but it could very well end up starting a bloody military action. which would certainly damage, or even destroy the Beirut banking industry.

Israel has made it very plain that, if Hezbollah starts another war, it intends to level Lebanon's infrastructure, via aerial attacks. Lebanon's banks are the economic glue that confers prosperity upon the nation. Should they be closed, when their brick-and-mortar facilities are damaged, Lebanon would certainly be seriously damaged, economically.

Therefore, playing war drums along the Blue Line, will only end up causing severe damage to Beirut's banks, and thereby inflict a serious blow upon the people of Lebanon. Scale down the rhetoric, please, Mr. President. Otherwise you may destroy Lebanon's best asset.
Posted by Kenneth Rijock at Monday, January 22, 2018