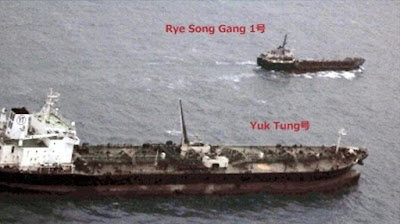 The Japanese Navy has reported that it witnessed the Dominica-registered oil tanker, YAK TUNG, meeting a UN-sanctioned North Korean tanker, in the East China Sea, under circumstances that generally indicate an illegal transfer of oil between the two vessels. A photograph, taken when the two ships were encountered on the high seas, is shown above. There are serious questions about the circumstances under which the Yuk Tung was registered, whether bribes and a clearly excessive registration fee were paid, and whether the entire Dominica vessel registration program is hopelessly corrupt, and in violation of international maritime law.

Dominica-flagged oil tankers have been used to illegally transport sanctioned Iranian oil, as part of an illicit sales program operated by Reza Zarrab, Babak Zanjani. and Alireza Monfared. Monfared, who is in Iranian custody, had a diplomatic passport issued illegally by Dominica. Zanjani was convicted, and faces the death penalty in Iran. 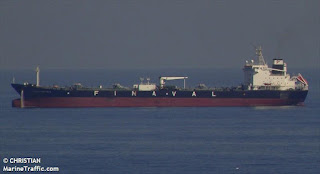 The United States has been ignoring disturbing years of similar events in the English-speaking countries of the East Caribbean, and the widespread misuse of governmental powers by senior members of the Commonwealth of Dominica can no longer be classified as minor. Facilitating oil shipments to the renegade regime in North Korea is a major threat to world peace, as well as being a violation of international law. How many other Dominica-flagged oil tankers, previously assisting Iran in its oil sanctions evasion scandal, are now traveling  towards North Korea ?
Posted by Kenneth Rijock at Wednesday, January 24, 2018