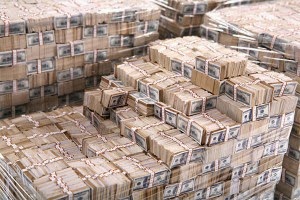 If you thought that the vintage 1980 "Miami Vice" days of banking were gone forever, when heavy bags of drug profits were delivered directly into the front doors of Brickell Avenue financial institutions, think again. The dirty cash is back, but the game has changed. Now, it's suitcases of large denomination currency, sneaking in the back door, from Venezuela, for the purpose of rescuing Florida banks that, for one reason or another, are now seriously undercapitalized, and in dire trouble with regulators. Blessing or curse ?

The problem is that one of the conditions attached to the money is that one cannot inquire as to either the Source of Funds, or the Beneficial Owner. These restrictions have caused some banks to summarily decline such a windfall, even those who are, frankly, desperate to attract investors to recapitalize. Others have not been so choosy. Also, those individuals who are offering this obviously dirty cash are asking a steep price for their bailout money: bank stock, and in some cases, a controlling interest. It's sort of like making a deal with the devil, and you know what ultimately happens to the offeree.

It is not known exactly where this money is coming from, it is most likely drug profits from the Cartel del Sol, laundered Iranian funds, money received by corrupt PEPs in the manner of bribes and kickbacks, PdVSA profits, siphoned off by corrupt officials, or other illicit funds, and with Venezuela's strict currency control making US Dollars more desirable than gold, it had to have come from some well-funded, and powerful, individuals and organizations.

Just like in the bad old days, the funding arrives as dinero en efectivo, what you and I call bulk cash. How does one get a pair of large Samsonite suitcases full of currency into the United States, you say ? Smuggling it in via business jet, (which is also the preferred method of delivery into the Republic of Panama, by the way) would seem to be the technique with the smallest amount of risk, but there are other methods known to be generally successful, including some that you would not suspect. There are other players out there, hidden in the shadows, who may surprise you.

One wonder what will ultimately happen, when the "donors" start making offers to bank management that they are unable to refuse, or their front men, who own your  bank stock, are indicted for their involvement in criminal activity. Will the bank end up seized by the United States, or simply be abruptly closed up by regulators, leaving all the other shareholders out in the cold, with a worthless investment ?

So I ask the question: where are the alphabet-soup lettered government regulators in all this ?