ATTORNEY FOR SILK ROAD OWNER ASSERTS THAT SINCE BITCOIN IS NOT CURRENCY, THERE CAN BE NO CHARGE OF MONEY LAUNDERING

The lawyer defending Ross Ulbricht, the reputed owner of the underground Silk Road website, and who has been charged* with drug offenses and money laundering, has argued that his client cannot be charged with money laundering offenses. He has also sought to dismiss the other counts against his client; those turn on computer and internet law, but may be of relevant interest to some readers.

The thrust of his argument is that:

(1)A Bitcoin transaction is not a "monetary transaction" under the statute.

(2) Therefore, all Bitcoin transactions are not, by definition "financial transactions," because they do not employ monetary instruments, or currency. 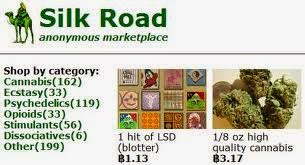