PANAMANA SAYS PRESIDENT MARTINELLI HAS BEEN CHARGED WITH CORRUPTION IN ITALY 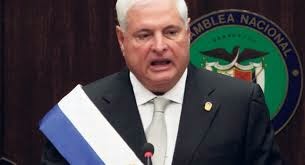 Local sources in Panama advise that the Government of Italy has filed criminal charges, for corruption, against Panamanian President Ricardo Martinelli. It is apparently waiting for his term in office to end before making it official, and asking for his extradition. Martinelli has Italian citizenship.

One source states that the charging documents have been delivered to the Ministry of Foreign Affairs, whose officials served them upon the president, who reportedly was defiant and arrogant, and denied that he would ever be tried in Italy. Given that the leading presidential candidate standing for election as Panama's next president has stated that he has chosen Martinelli's wife for Vice President,  you may expect a political crisis in Panama after June 30.
Posted by Kenneth Rijock at Thursday, April 10, 2014