OUTSIDE INTERFERENCE IN PANAMANIAN PRESIDENTIAL CAMPAIGN 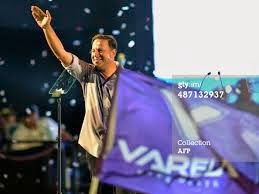 Six Venezuelan nationals were taken into custody, by the authorities, in Panama City this week, and delivered to the Attorney General of Panama, after they attempted to distribute campaign fliers falsely accusing the Opposition presidential candidate, Varela, of money laundering, and other crimes, in the legends Sports scandal. Those arrested had false identification, purporting to show that they worked for the Varela campaign.

Given that Arias' presidential campaign is reportedly being managed by a Venezuelan national who formerly was a senior campaign adviser to the late Venezuelan president, Hugo Chavez, the hiring of foreign nationals in an already discredited attempt to smear Varela, is extremely disturbing. President Ricardo Martinelli's wife, Marta Linares is the vice presidential candidate on the Arias ticket, and should he not be able to serve for any reason, she would become president. Rumors abound in Panama that this is Martinelli's goal.

Panama is in the eighth day of a nationwide strike of construction workers, and many expats living in the country are apprehensive about the election. An election scandal would destabilize the nation, and raise Country Risk, which is already elevated, due to fears about the possible revival of the 30% corporate income tax on foreign-derived income.
Posted by Kenneth Rijock at Tuesday, April 29, 2014