ARE MALTA'S POLICE KEEPING SECRETS ABOUT A MALTESE CAREER CRIMINAL ARRESTED FOR TERRORISM ? DID HE HELP MURDER THE BRITISH JOURNALIST LINKED TO DAPHNE ? 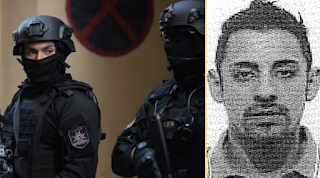 This is JOMIC CALLEJA; He was arrested several months ago in Malta, seeking to obtain, amongst other things, Polonium 210, which is a favourite poison of the Russian intelligence services. According to his attorney, he is cooperating with the Police of Malta. So why don't we know whether he was involved in the assassination of the British investigative journalist, Barry Randall, employing Polonium, whether as a middleman or otherwise involved with Montegrin criminals?  And, if so, upon whose orders did he Act ?

There appears to be a news blackout on Calleja's cooperation, and we suspect that the present government has instructed law enforcement not to release any details of the statements that he made in custody. He was subsequently released on bail, notwithstanding that he also sought explosives, which makes him a danger to the community. These are the tools of a terrorist or an individual engaged in murder-for-hire; he should still be in custody. He is known in Maltese criminal circles to have a very close  relationship with a Labour Party delegate, and that may have been the reason he is out on bail.

Mr. Randall, who is known to have worked with Daphne Caruana Galizia, took a mysterious trip to meet a new source in Montenegro, where it is believed he received the Polonium under circumstances that have not yet been publicly revealed. After hurriedly returning to the United States, he became ill, and subsequently passed away.

Randall's relationship with Daphne came about due to their mutual interest in corruption, specifically in the context of Citizenship by Investment (IIM) programs, which he covered extensively in the five East Caribbean states that, like Malta, offer passport to foreign investors. he also received inquiries ( and veiled threats) from one of Malta's more mysterious businessmen, who is known to front for Chinese interests abroad, using funding to draw unsuspecting Third World countries into the expanding Chinese sphere of influence.

Are the Police withholding Calleja's confession about his role in the poisoning of Barry Randall ?  Any disclosure in Malta about yet another murder of an investigative journalist would shake the fabric of Maltese country to its roots, and possibly spawn a new protest movement, which the ruling Labour Party candidly could not handle, since the Daphne case is still an open wound that will not heal. Will we ever learn if Calleja  acquired the Polonium for the assassins ? Certainly not from Malta's Police.