OFFICIAL US SOURCE: EX-PM MUSCAT IS A NAMED CO-DEFENDANT IN MONEY LAUNDERING AND FINANCIAL CRIME INDICTMENT 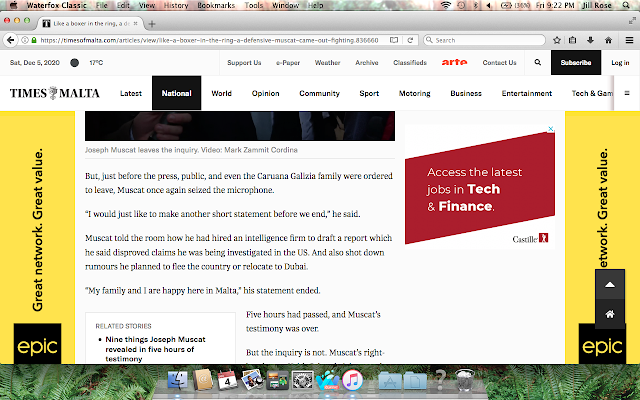 After repeated queries, one of our US Govt sources did confirm that Malta's former Prime Minister, Joseph Muscat, is a named co-defendant in a pending money laundering and financial crime case. The source has declined to identify the other unnamed officials, but did confirm that there are several listed. This is our first instance of positive confirmation of what has been suspected, and alluded to, for a number of months, and should put to rest the controversy.

if you look at the screen shot above, you will see that Mr. Muscat has been busy seeking to spin his version of the truth, namely that there is no indictment pending, reportedly using an American "private intelligence firm" to do his dirty work for him. Any such report, if it is ever issued, will most certainly contain, in the fine print, a disclaimer about the information, making it useless, though it will be  portrayed as definitive. Simply put, one cannot prove a negative fact.

We are troubled with the selection of that American private intelligence firm as the entity charged to produce the bogus conclusion about Muscat's indictment, for it most certainly has also been asked to find any possible dirt on: (1) The judges conducting the inquiry, (2) The witnesses, (3) The leaders of the Nationalist Party (PN) especially the members of the Shadow Cabinet, and (4) Yours truly. If you live in Malta, and are asked questions by individuals with obvious American accents, you may want to verify with whom you ae actually speaking, for you may be unwittingly adding to Muscat's smear campaign. ( of course if they are FBI Special Agents following leads, they will identify themselves, so not to worry on that subject).

We shall, within the limits imposed upon us, seek  zealously to ascertain the names of the other co-defendants, but to date we have been unsuccessful. Please bear with us, as we move closer to the actual dates or date that the indictments are unsealed, and extradition proceedings initiated. As the man said, "You can run, but you cannot hide."

A final note: we now have absolute confirmation that Muscat's "no show"  lucrative CEO job is in final stages of completion in Dubai; do not believe his repeated denials. He's moving there to start collecting all the illicit bribes and kickbacks he's been hiding offshore. Will Malta arrest him before the US does ? We doubt it.