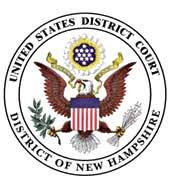 Readers who have been following the Pilatus Bank story know that an Ex Parte Petition was recently filed in US District Court in New Hampshire seeking to obtain Discovery from Lawrence Connell, who was the designated Competent Person supervising the bank's affairs after its license was revoked. The Petition recited that the material gathered would be used in a pending proceeding in the EU, and well as a contemplated suit for damages, to be filed against the European Central Bank. Miami attorney Edward Mullins (Reed Smith)  brought the action, with local co-counsel from Manchester, Christopher Vrountas.

The District Judge assigned to the case has now dismissed the Petition; The grounds that the Court cited were statutory:

(1)  There was no evidence that Lawrence Connell actually resided in the District of New Hampshire.

(2) There was no statement that the material sought was not protected by "any legally applicable privilege."

(3) Pilatus counsel had not indicated where the action may be brought, or what claims it would raise against the ECB. The matter is restricted to the annulment action as the damages suit is merely speculative.

The Court also stated that, even if the statutory grounds were satisfied, it might still dismiss the Petition on discretionary grounds.

The Court then dismissed the Petition, without prejudice, allowing counsel to refile an Amended Petition, and serve it upon Connell, no later than December 22, 2020. Given that the above are statutory requirements, requiring strict compliance, we wonder whether someone other than Mr. Mullins, who is an experienced Federal Court litigator, drafted the document, and if it was prepared hastily, in anticipation of criminal proceedings possibly to be filed against clients, in District Court or abroad.

Let me explain my theory about why the petition is a clever, though underhanded, way to obtain discovery for use in a future criminal case, possibly in Miami, or in the Republic of Malta:

(1) The convicted Swiss Banker (and money launderer) Matthias Krull's case in in SDFL. Several filings have been sealed since he pled guilty. One sealed filing is specifically restricted for 12 months. A major Main Justice prosecutor form DC Main Justice has been assigned to the case post-conviction, which generally means that there are others to be subsequently charged.

(2) The movement of over one hundred million dollars from Venezuela reportedly flowed through Pilatus Bank; the other cash movement was into Miami, and it was all supervised by Krull.There are a number of related cases in Miami, and it looks like there are going to be other cooperators. Whether any of these individuals could testify against anyone affiliated with Pilatus is an open question.

(3) Why was Attorney Mullins given the civil case ?  Why not any other lawyer in New York, where Sadr has his criminal case, which is much more convenient than Florida, in my humble opinion. it also would have been much easier to locate an attorney in NYC also admitted in New Hampshire District Court, eliminating the need for local counsel.

Next, let us pay attention to what's currently going on in Malta. While details cannot be obtained, as the relevant document is classified, an official report has reportedly concluded that criminal charges, on the grounds of money laundering, should be brought against a large number of individuals, regarding Pilatus Bank. While we cannot establish whether such cases will actually be filed, the Discovery sought to be obtained in New Hampshire could conceivably be useful in the defense of such charges.

While we have a lot of questions regarding the Petition, why it was filed, and by whom, and for what purpose, perhaps the Amended Petition, when filed, will clear up the mystery. It must be served upon Connell by the 22nd of December, or the case will be close by the Court. 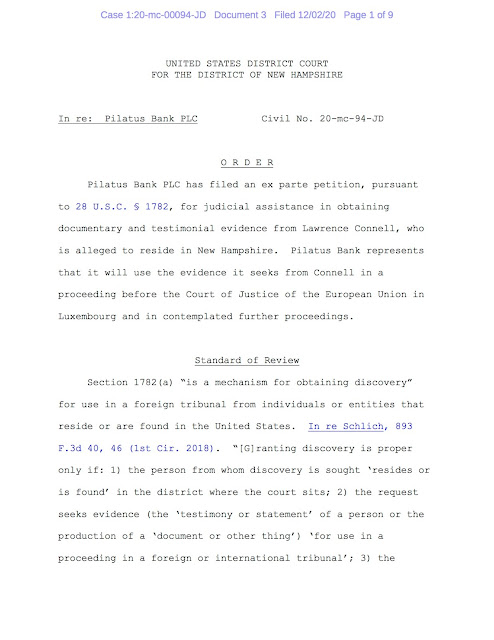 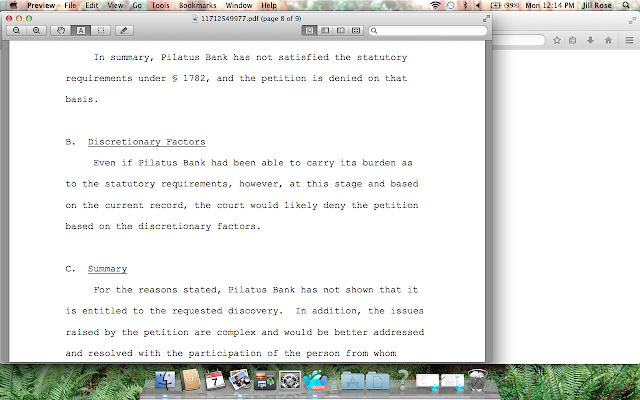