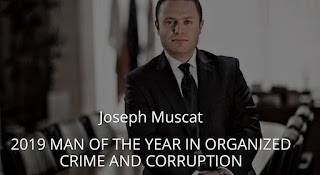 We are pleased to report that we have now received absolute confirmation of our prior information concerning the Chief Executive Officer position that has been given to former Malta Prime Minister Joseph Muscat. We are aware that Muscat has totally denied that such job exists, and that it has been awarded to him.

We wish to affirm that these denials are little more than lies and misstatements of material fact, which have been repeated in the Maltese press as part of Muscat's deliberate campaign of intimidating local media. While we have covered Muscat & Cardona's unannounced trip to Dubai this week, Maltese media seems to have deliberately avoided it. Just what it it that they fear ?

Allow us to go into further detail on the CEO position.

(1)The newly-formed enterprise is a joint venture between a catering company in Malta involved in aviation/hospital/retirement home catering, and a hotel group.

(2) The hotel group is also involved in time sharing, and owns American franchise brands in Malta.

(3) The new company's intended main business in Dubai is to supply hospitals with catering.

(4) The venture set up an office in Malta to create this project; there is a Maltese project manager. The office, in the north of Malta,is in one of the hotels owned by the same group.

(5) The project team was ordered to maintain absolute secrecy on the project, but one participant was overheard bragging about it in public. One witness said he was "boasting about it, actually."

(6) It is not known if Noor Bank will be the bankers for this project in Dubai.

We challenge Joseph Muscat to again publicly deny the truth about his future employment, now that we have supplied extensive details about the extensive preparation now close to completion.

We intend to photograph Muscat at work on the job, and to forward that material to the European Parliament and European Commission, which are understood to be conducting active investigations at this time. We believe Muscat will commence his move to Dubai in January.